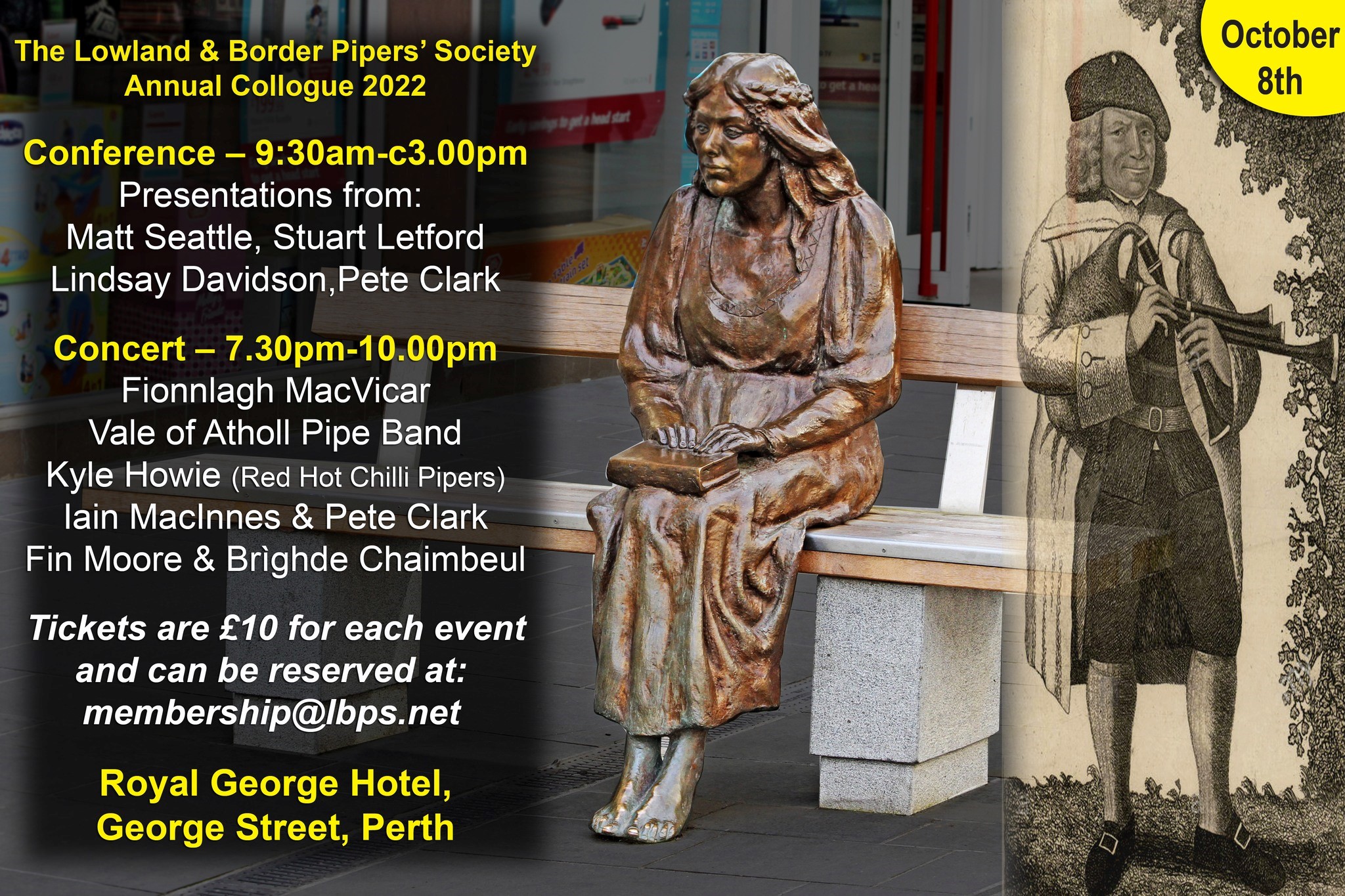 One of the world’s leading bagpipe organisations, the Lowland & Border Pipers’ Society, is set to make a noise in Perth for the first time in its 40-year history.   The Society will be holding its annual conference (which it calls the ‘collogue’ from an antiquated word meaning ‘to confer’) in the historic Royal George Hotel in George Street on Saturday, 8th October.   The conference is held through the day and a concert takes place in the evening. Both are open to the public and are ticketed separately (£10 for each).   The conference always features a handful of interesting presentations and this year will be no exception.   Matt Seattle from Hawick, whose main interest is the piping tradition of the Borders, is the man who discovered that the British Isles; earliest bagpipe manuscript – that of William Dixon in the early 18th century – was lying unbeknown to anyone in the AK Bell Library in Perth. In 1997, Matt published the manuscript and the LBPS devoted an entire conference to it. Now, 25 years later, Matt discusses the state of piping in that quarter century since his discovery of the manuscript.   LBPS Chairman, Stuart Letford from Dunkeld, is a former manager of the College of Piping and editor of the Piping Times. His presentation is a fascinating insight in to the Town Pipers of Perth, a civic role that dates to the time of King James V. Until the early 19th century, most towns in Scotland’s lowlands employed a piper – and sometimes a drummer – to play around the town each morning and evening as well as at various civic and society functions throughout the year. Mr Letford has been delving into the archives and hopes to put flesh on the bones of these individuals.   Professor Lindsay Davidson, who now lives in Poland, will be speaking about teaching practices and on future activities of the Society.   A one-to-one Q and A session with the famous Dunkeld fiddler, Pete Clark will then end the presentations before a mass ‘ session’ concludes the afternoon.   In the evening, the LBPS is hosting a concert to mark the occasion of this, its first visit to Perth. The stellar line up is:

LBPS Chairman, Stuart Letford, said: “This promises to be a superb occasion. We have a tremendous line up for the conference and the evening show.   “Tayside has long had a very strong piping tradition but it’s mostly in the area of pipe bands. As the LBPS approaches its 40th anniversary, we wish to use this occasion to showcase to youngsters in particular the wonderful music of Scotland’s bellows-piping tradition. Tickets are £10 for each but we are allowing those under the age of 16 free entry if accompanied by an adult.   “All are welcome to the conference and concert. I think this event will make a big impact on the traditional music scene of the area and will be remembered for years to come.”   Tickets are available from the Lowland & Border Pipers’ Society website at  https://lbps.net/j3site/index.php/news Alternatively, anyone can send an email to: membership@lbps.net and tickets can be reserved there. Tickets will also be available on the door.   The conference runs from 9:30am to 3pm and the evening concert kicks off at 7:30pm.