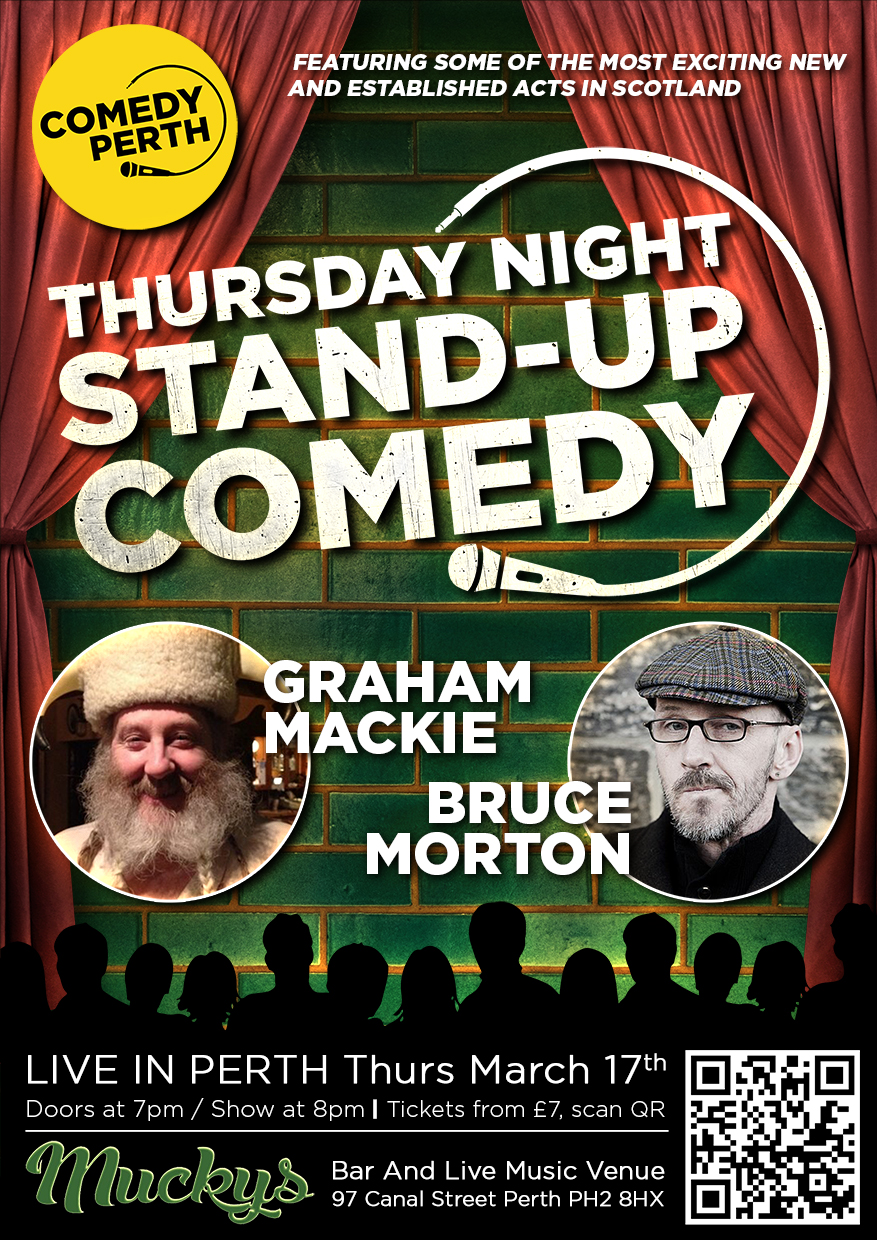 Laugh right into your Guinness this St. Patrick’s Day with another top quality stand-up comedy show from Comedy Perth at Mucky’s Bar, featuring veteran compere Graham Mackie and comedy legend Bruce Morton.   Headlining the night will be award winning comedian, actor and writer Bruce Morton.  A founding member of The Funny Farm Collective, he helped kick-start the Scottish stand-up scene, and since then he’s been one of its keystone performers.  Perhaps best known for playing the undertaker I.D. Sheathing in Scotland’s hit show Still Game, you will also have seen Bruce in Rab C Nesbitt, Catholics & Sex, The Late Show and Paramount City to name a few.  He has won the Sunday Times Comedy Award, Scotland on Sunday Critics Award and the Spirit of Mayfest Award, as well as being nominated for the Perrier Award. “Quite simply one of the best and most genuine humourists on the Scottish scene” -The Express “He can tell a story as entertainingly as Billy Connolly, but the sting in its tail is in a class of its own” – The Times “Devastatingly funny…wry and poignant” – The Scotsman   Your host for this evening is four-time Scottish Comedian of the Year finalist and seasoned comedy circuit stalwart Graham Mackie.  Down to Earth and just plain funny is the only way to describe Graham, who has drawn his best material from his dysfunctional home life and his eventful career in teaching. “Inherently warm, likeable character who instinctively brought a spark of joy” – Chortle “Had me in stitches” – Breakneck Comedy   Tickets are from £7 and available here: https://comedyperth-mackie-morton.eventbrite.co.uk.  We will absorb booking fees of first 10 tickets bought more than a week in advance. Where: Mucky’s Bar And Live Music Venue, 97 Canal Street, Perth PH2 8HX When: Thursday 17th March.  Doors open at 7pm, show starts at 8pm.