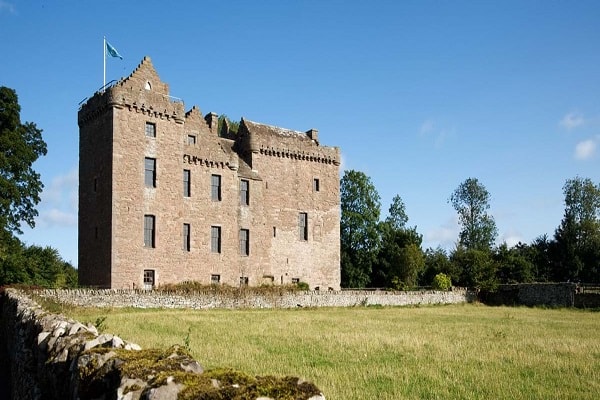 Huntingtower Castle has hosted some notable visitors, and been party to some dramatic events. Most famously, Mary Queen of Scots stayed here in 1565, while on honeymoon with Lord Darnley. A lordly residence for 300 years – from the 1400s to the 1700s – the castle is linked to both the Ruthvens (later earls of Gowrie) and the Murrays (earls of Tullibardine and later dukes of Atholl). Before 1600, Huntingtower was known as the Place of Ruthven. In a famous episode known as the ‘Ruthven Raid’, the 1st Earl of Gowrie held James VI, Mary’s son, here against his will in 1582. An equally bizarre event called the ‘Gowrie Conspiracy’ led to the downfall of the 3rd Earl of Gowrie in 1600. The Ruthvens were disinherited and their forfeited castle was renamed Huntingtower. Huntingtower today looks like a single building, but the Place of Ruthven had consisted of two fine tower houses standing about 3m apart. A frontage facing the gardens to the south may have always linked the pair.