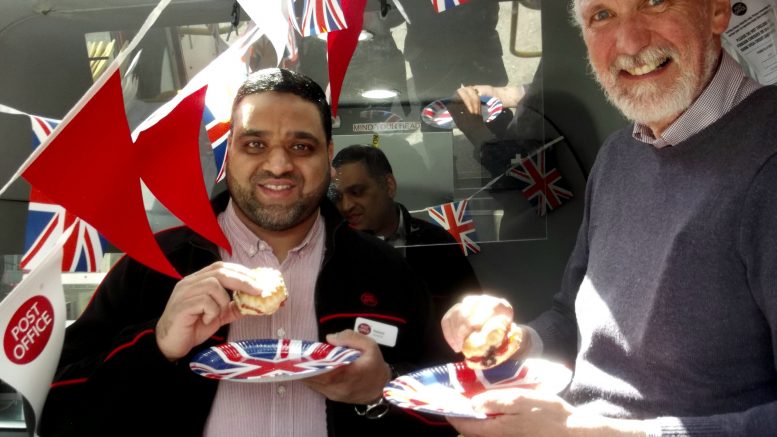 Postmaster Walieed Ramzan, who serves the community of Scone, laid on a traditional Scottish scone tea for customers as an early celebration to mark the Queen’s 70 years of reign.

Walieed is the Postmaster for Kennoway and he operates a Mobile Post Office for 16 communities including Scone, which he visits twice a week. For the Queen’s historic milestone, he has decorated his Mobile Post Office with reams of bunting and flags.

Lewis Simpson, the retired Postmaster for Scone, also joined in with the afternoon tea and met some of his customers that he served for 17 years.

In Scotland a scone was traditionally more savoury. It is often made with soda, oats or potatoes and cooked on a griddle. They are known as tattie scones. A sweet version in Scotland is now served with butter and jam, but never with cream.

The Duchess of Bedford in England started the tradition of afternoon cream tea in the 1800s at Woburn Abbey. The idea then became popular with high society and for special occasions.

Walieed Ramzan who has operated the Mobile Post Office since 2018, said: “After the last
two years of the pandemic it is great for a community to get together to be able to
celebrate special occasions. It is remarkable that the Queen has reigned for 70 years. What
better way to mark it than enjoying a scone in Scone.”

Man taken to hospital after being hit by car in Perth

Postmaster Walieed Ramzan, who serves the community of Scone, laid on a traditional Scottish scone tea for customers as an early celebration to mark the Queen’s 70 years’ reign.
The post Postmaster for Scone celebrates with scone tea with customers in Scone for early Jubilee appeared first on Perth Gazette. Perth Gazette …