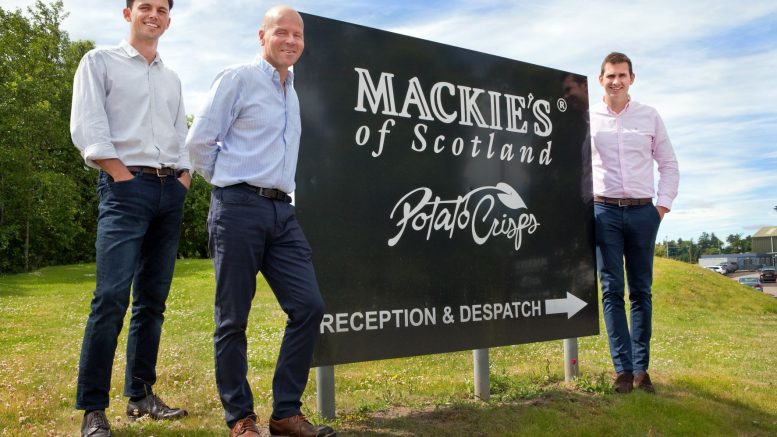 Scotland’s leading crisp and snacking brand is set to go its own way – after the successful completion of a share buy-out.

The families pooled resources to invest and build a successful independent business, launching a range of Mackie’s potato crisps, from a base near the Taylor’s family farm in Errol, Perthshire.

It now produces more than 2 million bags each month – and is established as one of the UK’s favourite premium crisps.

As majority shareholders, the Taylor family has now purchased the shares held by Mackie’s – a key step in the long-term strategy of the joint venture.

Production of the existing, award-winning crisps will continue at Errol but will transition to a new brand in mid-2023 that will reflect the Taylor family’s ownership.

The company’s offering has been extended over the years to include popcorn and the “Lentil waves” range of popped chips.

Over the last decade, both Mackie’s crisps and ice cream businesses have enjoyed increasing levels of success, based on profitable growth, several award-winning products, increasing sales in UK and export, along with both businesses now being joined by some of the next generation of each family.

Today, with both businesses aiming to continue their growth plans for the next generation, the Taylor family are taking control of the crisps and snacking business by buying Mackie’s shares in the business.

James Taylor, MD of Mackie’s at Taypack said: “This next exciting stage in our development is made possible by the success of the joint venture to date, in particular the expertise and support from Mackie’s.

“We have some exciting growth plans and innovative products in the pipeline, which will ensure the continued success of the business under its new brand in the years ahead.”

Mac Mackie, MD of Mackie’s of Scotland commented on the success and uniqueness of the joint venture: “We are delighted to have been able to play our part in establishing a quality snack business in Scotland and look forward to seeing the new brand grow and succeed.

“Innovation and progression are at the heart of Mackie’s, and we will continue the development of our premium ice cream and chocolate ranges at the heart of our success.”

Both Mackie’s and Taylor’s look forward to continuing to make a growing range of delicious treats and snacks for their loyal UK and global customer base.

Mackie’s of Scotland produces luxury ice cream at its fifth generation Aberdeenshire farm from ‘sky to scoop’, with wind and sun-powered renewable energy powering the dairy where it makes its ice cream using fresh milk and cream from its own herd.

Produced nearby the fourth-generation Taylor farm, Mackie’s Crisps has become a leading Scottish crisp brand with a dedication towards making high quality, delicious crisps and snacks and will now start to make the transition to a new brand, which is set to hit shelves in 2023.

Dobbies search for Perth’s ‘Not Your Average Gardener’

Scotland’s leading crisp and snacking brand is set to go its own way – after the successful completion of a share buy-out.
The post Scottish crisp makers become wholly-owned appeared first on Perth Gazette. Perth Gazette …